I made a new website for my new lab!

Please follow along with our research and outreach at Georgia Southern University at this new site:

https://www.thekanelab.com
Posted by Unknown at 7:16 PM No comments:

I am recruiting 1-2 Masters students to start in the Biology Department at Georgia Southern University in Fall of 2017!

I am looking for self-motivated students with an interest in functional morphology, biomechanics, ecology, and evolution of fishes. Current work in the lab is examining the coordination, or integration, between locomotion and feeding during prey capture in fishes, including native freshwater Centrarchids as well as Trinidadian guppies. I expect that projects will align with this current work, but I also encourage students to develop their own interests within this scope.

Tuition and stipend support will primarily be in the form of teaching assistantships, but other opportunities are available, including a summer supplement. Partial support for research and travel will also be available. I expect students to apply for external funding to supplement these funds.

I encourage interaction with both scientists and non-scientists through collaboration, conference attendance, publications, online media, and outreach events. I support student creativity in these efforts.

Georgia Southern University is part of the University System of Georgia and is located in Statesboro, about 1 hour west of Savannah. The Biology Department consists of approximately 40 faculty with interests ranging from cell and molecular biology to ecology and evolution. Resources that would be available to graduate students include a new LEED certified research and teaching building, animal housing facilities, microscopes, boats, a museum collection with regional fishes, and collaborations with field stations throughout Georgia.

Interested students should make sure they meet the admission requirements and contact Dr. Emily Kane at ekane@georgiasouthern.edu with a statement of interest and CV.

Transitioning to a faculty position

I am visiting Statesboro and Georgia Southern University this week for my new faculty orientation and to try to find a house to buy so we can move here soon. Both things have been successful! I am officially onboarded and have my email address and we had an offer accepted on a house! I even visited the GA Southern Museum on campus, where I hear they might have some ideas in store for me!


I have also had a lot of time to think and reflect on the transition from student to faculty. Now that I am standing in GA and  they're pointing to where my name is going to go on the door, it's becoming real. I am still in shock that this is all happening - that I am going to be a tenure track faculty, have graduate students, run my own lab, and create my own courses. Maybe it's the imposter syndrome, maybe it's all the grim social media posts about the low percentage of us that make it into academic jobs, maybe it's that I still feel so young compared to my advisors, or maybe all of the above.  It's hard for my brain to realize that I am transitioning from being a student to now being the teacher. I know I will still continue to learn, but I'm supposed to be an expert, passing on my wisdom to the next generations. I have only ever been partially responsible for molding young minds because I always had to report to an instructor or coordinator. Now I am going to not only be the instructor, but also an advisor, and mentor.

I am starting to spread my wings and fly on my own. Some days I feel like a tiny baby bird with no feathers, and I just need someone to toss me a caterpillar and tell me they'll help me get there. Those are the days that I wonder how I am going to do it all. Other days I feel like I've been flying on my own for years now and am essentially running my own lab out of Cameron's lab. I'm the one handing out caterpillars and helping students discover their own wings. Fortunately, those more mature days now outnumber the helpless days, so I know I'm heading in the right direction. Part of how I judge my success is based on my students' successes. So part of why I feel unsure sometimes is because I am still new to the game and the number of students I have interacted with is small compared to someone like Cameron, Tim, or Chris (my advisors), but that doesn't mean I am bad at teaching and advising. I have to remind myself of this a lot.


Still, it is intimidating to look at my lab space and see a blank slate and think that I am responsible for making this work. And while I am figuring that out, I also have to learn to teach a new class, get involved in service opportunities, and move to a new town with 2 dogs, a rabbit, and fish. It's also intimidating to think that my colleagues consider me an expert on functional morphology and that they will come to me with questions on how animals work. I have always thought of others, particularly those with many book chapters and symposia papers, as the experts. But I am doing those things too, and in fact, I do know a lot about functional morphology and how animals work. I have to accept that we all have specialties, and if someone asks me about seal whiskers or lizard muscles, I might have to send them to someone else, but it's a different story if they ask me about fish heads!

I've been promoted from crew to captain, and it's my turn to get this ship into port safely. It's a challenge, but it wouldn't be exciting if it was too easy.

Posted by Unknown at 6:49 PM No comments:

It's officially been accepted by the publisher! Dale and I were asked by one of the editors, Amanda Glaze (@EvoPhD) to contribute to a book entitled:


Evolution and education in the American South:
culture, politics, and resources in and around Alabama

Our chapter is on our own experiences with evolution, the background behind the guppy kits, and the general approach of the kits. 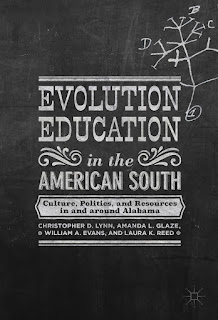 The Sinful Side of Guppies


First, congrats to my colleague Dale Broder for accepting an offer for a postdoctoral position with the Interdisciplinary Research Incubator for the Study of (In)Equality at Denver University! In celebration of her impending defense, I thought I would post about what I've learned from her over the past few years regarding the dark side of guppies, that is, reproduction. Also, since I took some photos for her to use and wanted to post them, it seemed like the right place.


Guppies are a small livebearing fish from the Caribbean and South America. This means that they have internal fertilization and the young develop inside the females, similar to pregnancy in humans. Males inseminate females with an organ called a gonopodium, which is a modified anal fin. Since females have a large investment into these offspring, they are choosy about who they mate with. The idea is that they should give their offspring the best chance of also surviving and reproducing, increasing the female's fitness. However, males should also do their best to pass on their genes, which leads to an interesting paradigm where males and females potentially have conflicting goals (if the female is not interested in the male). This is the primary force behind the vast differences in size, color, body shape, and behavior between males and females.


To compete with each other, males develop unique color patterns that are attractive to females. Females are attracted to the color orange. This may be because of a sensory bias since orange is also associated with tasty food items, but it may also be an indicator of male quality since orange pigment is derived from diet. Females also prefer uniquely patterned males, which leads to the most extreme polymorphism I am aware of, such that no two males (even brothers) are exactly alike.


One interesting way that males try to encourage females to mate with them is through courtship displays. This involves males swimming around females to ensure they can see their colors, as well as displays that look like a whole-body spasm, called sigmoids. Males are also fairly pre-occupied with females, and follow her everywhere just in case she finally wants to mate. Based on my observations in the lab, I'm pretty sure that, given the choice between food or a female, he will always pick the female.

So what does he do if she doesn't want to mate? This is where it gets a little more sinister. At this point, male guppies engage in a behavior called forced copulation, in other words, they don't give the females a choice (I didn't get photos of this). This can become particularly stressful for females since there are often several males around, all of which are trying to mate with her. For this reason, once they are mature, females are continuously pregnant. Females can also store sperm (in my experience, up to 1 year!), which is presumably an adaptation for colonizing new areas of streams. Because of these two mechanisms, multiple matings and sperm storage, the offspring from one female may be sired by several fathers.


This scenario that I've just explained becomes more complicated in high predation environments, where color patterns and displays make males highly conspicuous to predators. Here, males have minimum color and do not display as much, engaging in more forced copulations. This means that their gonopodia tend to be longer than males in environments without predators (sometimes up to 1mm longer!). See some examples below (note the colorful guppies are from Dale's personal tank and are extremely colorful): 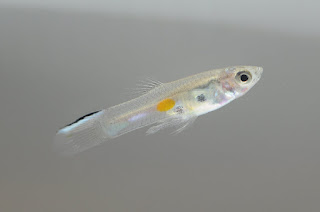 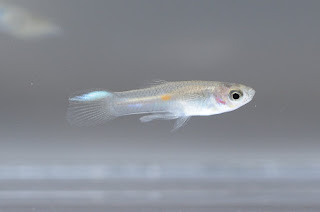 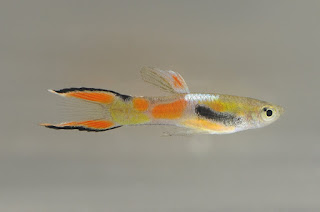 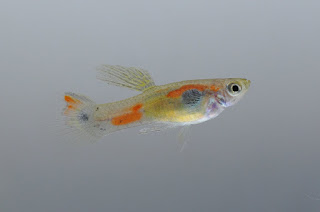 These may be small fish, but they sure do have a lot for us to learn about. The more I learn the more I am intrigued by them! Also, the more I am glad I'm not one of them...

I am recruiting 1-2 Masters students to start in the Biology Department at Georgia Southern University in Fall of 2017! I am looking for... 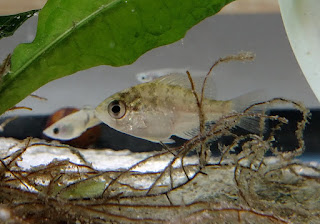 Get updates by entering your email below: